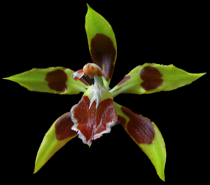 Type Species for the Genus

The name of the organisation is The International Odontoglossum  Alliance, also referred to as “ the Alliance”.

The purpose of the International Odontoglossum Alliance is to promote all aspects of the study, cultivation, breeding and conservation of specifically the orchid genus Odontoglossum, species and hybrids, including associated genera.

The Alliance has no formal membership.

Individual enthusiasts and organizations whose aims are consistent with those of the Alliance can become involved by simple registration with the Alliance Secretary.

Executive Officers will conduct day-to-day business of the Alliance.

Executive Officers serve for a period of 3 years and may seek re-election at the end of their term.

The Alliance will hold General meetings from time-to-time at International venues advised at least 3 months in advance to  registered enthusiasts via the Journal/Newsletter and Alliance website.

Any registrant may request items for inclusion in an agenda by submitting to the Secretary in writing not less than one calendar month prior to an advised meeting.

Proposals on which a vote is required will be described on the agenda or on an attached document. Such proposals cannot be changed significantly at the meeting at which the vote is taken. The International nature of the Alliance dictates that registrants unable to attend a meeting may make thoughts known to the Secretary  prior to the Meeting. Voting in these circumstances will be in accordance with arrangements circulated with the agenda and will direct that the Secretary must receive votes in writing at least seven days prior to the meeting.

Notes from meetings will be communicated to registrants as soon as possible by inclusion in the next available Journal/Newsletter via the Alliance website.

All funds will be denominated in US dollars and must be held in bank accounts maintained by the Alliance and in the name of Alliance.

The Treasurer will arrange for annual accounts to be examined independently prior to a general meeting.

The appointment of the independent examiner must be approved by the Executive Officers.

A copy of the examined accounts must be circulated with the agenda for Meetings.

AMENDMENTS TO THE CONSTITUTION

The Constitution may be amended by a simple voting majority of registrants at a General Meeting.